Interest Rates: How This 1000% Increase Will Overwhelm… Everything?

This content is from Elliott Wave International and it is worth reading if for no other reason than to explain why it is different this time. My preferred strategy remains being Long TSLA via LEAPS and Short the stock market via stock index ETF puts. One side of this pair trade will be up 5X in the next 12 months...in which case the other side just won't matter.

Interest Rates: How This 1000% Increase Will Overwhelm… Everything?
2-Year U.S. bond: Look at this dramatic rise in yield in just six months

The era of rock-bottom interest rates (or bond yields) appears to be coming to an end and the consequences will be excruciating for many.

Remember, the world is awash in outstanding corporate, student, government and personal debt.

The ability to service that debt will be seriously hindered by rising interest rates.

At this juncture, let's look at one measure of how much rates (or bond yields) have already risen. This is a chart of the yield on the U.S. 2-Year bond: 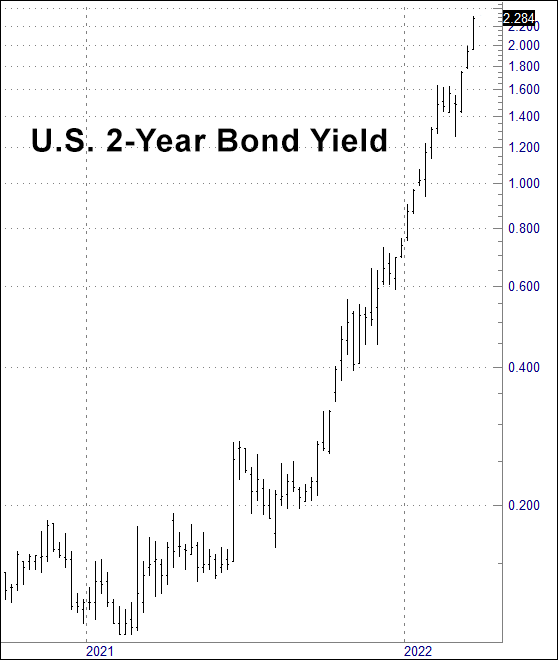 As you can see, in just the last six months, two-year interest rates in the U.S. have risen from .2% to more than 2%. That's a TENFOLD increase.

Here's what that means: Suppose a company must borrow money to keep the business operating -- let's say a billion dollars. Six months ago, that debt would cost $2 million to service. Now -- it costs $20 million a year to maintain. As a colleague put it, "that's a lot of snacks in the breakroom."

Also imagine all the public debt at every level of government. That debt must also be serviced. Of course, it's the beleaguered taxpayer who will be on the hook. The average interest rate paid on the national debt in 2021 was approximately 1.5%. That's a very low percentage historically, yet it amounted to $562 billion. Imagine if rates rise significantly from here!

The headline of a Jan. 25 article in The Hill asks:

Can our nation afford higher interest rates with the current national debt?

The silver lining around this cloud is that the financially conservative who put their money into savings accounts will finally have something to smile about.

The question is: How high will interest rates or bond yields rise?

If you'd like to learn how the Elliott wave method can help you forecast widely traded financial markets, you are encouraged to read Frost & Prechter's Elliott Wave Principle: Key to Market Behavior. Here's a quote from the book:

In markets, progress ultimately takes the form of five waves of a specific structure. Three of these waves, which are labeled 1, 3 and 5, actually effect the directional movement. They are separated by two countertrend interruptions, which are labeled 2 and 4. The two interruptions are apparently a requisite for overall directional movement to occur.

[R.N.] Elliott noted three consistent aspects of the five-wave form. They are: Wave 2 never moves beyond the start of wave 1; wave 3 is never the shortest wave; wave 4 never enters the price territory of wave 1.

Get more insights into the Wave Principle by reading the entire online version of this Wall Street classic for free.

You can get this free access by joining Club EWI, the world's largest Elliott wave educational community. Club EWI membership is free and allows your complimentary access to a wealth of Elliott wave resources on investing and trading.

This article was syndicated by Elliott Wave International and was originally published under the headline Interest Rates: How This 1000% Increase Will Overwhelm… Everything?. EWI is the world's largest market forecasting firm. Its staff of full-time analysts led by Chartered Market Technician Robert Prechter provides 24-hour-a-day market analysis to institutional and private investors around the world.